Achieving Financial Independence for Women: What Sets Us Back in 2022

Financial independence: a term that has risen in popularity over the years and has come to mean something important to women worldwide. But what does it really look like, and who does it really matter to?

What is Financial Independence?

Financial independence is an important goal for all people; however, it is particularly critical for women who have historically been faced with financial and social systems that stand as barriers to their independence.

Women face a unique set of challenges in the developed world, making it difficult to navigate and participate equally in the financial world. The gender wage gap, family obligations, and societal pressures are all issues women face every day. Overcoming these challenges can at times feel burdensome and that is why financial independence is so important for women; it helps lay the groundwork to overcome many of the gendered issues women face.

In order to achieve financial independence, it is first important to understand the factors that stand as barriers to that goal.

For most of Western history, women have not had control over their finances, instead this responsibility fell to their fathers or husbands. In fact, it was not until 1964 that women in Canada were able to open a bank account without obtaining their husband’s signature. While women’s rights have improved since then, the deeply entrenched societal norms surrounding women and discussions of money and finance still hold a heavy stigma. Transparent, open conversations about finance are critical for women to claim independence and empowerment over their economic circumstances.

What is IP Private Wealth?

IP Private Wealth is a Family Office—a team of wealth advisors that operates as a round-table board of advisors. Our 360° approach to examining your goals, wealth, and future needs is what makes us the first and only choice of family office for our clients. If you’ve been looking for a way to manage your wealth more effectively, reach out to us.

Statistically, women live an average of 4 years more than men in Canada. This makes financial independence not only a want but also a need for most women. As chances are, most women will have to manage their finances at some point in their lives, whether that be from the passing of a spouse or not. Furthermore, women are also more likely to take time away from their careers to care for children or other family members. This does not only diminish a women’s time spent earning money in their career, it also increases expenses relating to childcare, medical costs, and other household expenses.

The impact of COVID-19 on Women’s Earning Window

Since the beginning of the pandemic, we have experienced unprecedented economic shutdowns, unemployment, and financial insecurity. While this struggle was felt by the population at large, it was women who cared the heaviest weight of this struggle. Not only are women already affected by the gender wage gap, but the pandemic created further stresses as the sectors most highly affected by the pandemic – hospitality, food services, and personal care – are the sectors with the largest share of female employment. Pressures on women throughout the pandemic were further exacerbated by an increase in domestic responsibilities that fall disproportionately to women, despite their employment status. This led to many cases of burnout, causing women to leave the workforce to support their families’ growing needs. Even as the economy begins to re-open, the number of women able to re-enter the economy is significantly less, limiting our presence in the workforce and ability to achieve financial independence.

Why is Financial Independence Important? 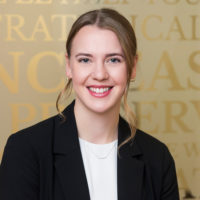 Cassandra is a Financial Planning Associate with IP Private Wealth. Cassandra works in tandem with the senior advisor team to create an intensive, 360° plan for each client that takes into account all aspects of their wealth--while also taking into account their personal goals and challenges. Cassandra plays a key role in providing clients with our holistic financial plans, called the IP360°. These plans provide direction to a client’s entire advisor group. She works closely with the advisory team to gather and analyze technical and financial information relating to the development of tax, investment, estate, and wealth planning strategies for affluent clients.